Challenge: Make something cool, from scratch, while on an airplane. Start when electronics are allowed and end when they’re not. 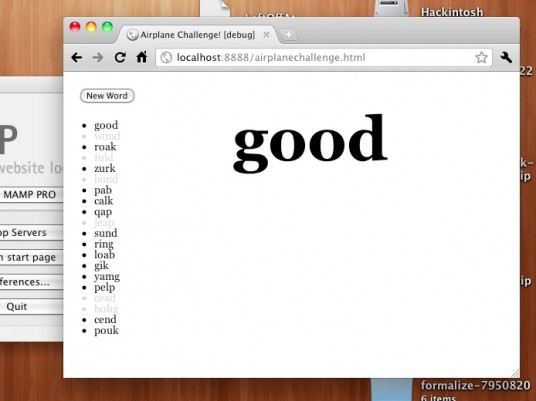 It’s a monosyllabic nonsense word generator. Sort of like my JabberWordy app but with more subjective, tuned arrays and with modified vowel sounds (think “ar”, “ol”, “um”) in addition to the normal vowels.

This was just an exercise, so it was missing some key things, namely:

What makes a word sound legit? What consonants, vowels, and vowel sounds are used more than others? And where in the word are they more prevalent, if so?

I imagine a crowdsourced app that puts the task of those questions on its users. Upvote and downvote buttons affect the weight and order of each array’s pulled item in subsequent combinations.

Additional features would be domain availability checking and a “My Words” bookmarking ability.

Feel free to take a look at the source and make use of any of it. No guarantees on any of it; I know it’s clunky.