tl;dr: Click this, type some stuff, watch the URL, and then come back if you’re curious as to what’s going on. 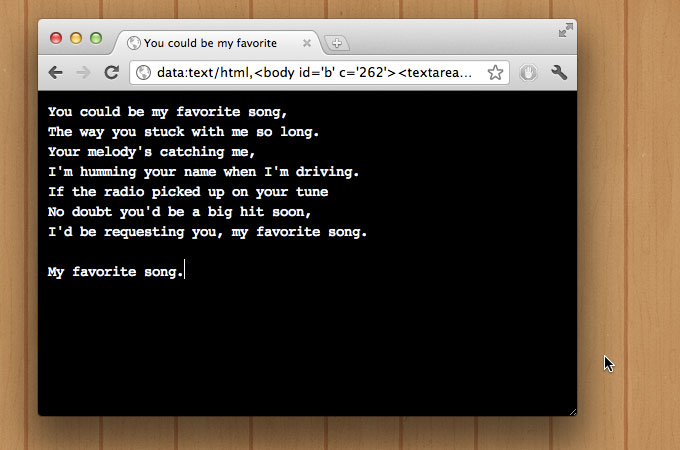 I was pretty enamored by that and used a variant of it at work for awhile to jot down my notes during the day. Like all tinkerers, I couldn't leave well enough alone, and so here's my fancier but definitely-not-the-smallest-and-so-not-as-novel version:

Mine uses a textarea instead of a contenteditable <pre>, since it's made to be fullscreen and thus doesn't need contenteditable's auto-adjustment to variably dimensioned content. (Actually, the one regret is that my text editor now won't use any of the HTML5 spec and so is not as trendy... Sniffle, sniffle.)

So we've got a fixed and fullscreen input. We'll use its first line (if it has one) as the document title and bind a debounced* function to its keyup event. When the function executes successfully, we write a new URL using the existing body's HTML, the input's encoded value, and its caret/selection position, and then we'll redirect the user to it, setting the caret position and repeating the process indefinitely.

* Debouncing is a method of rate limiting. It takes a time duration and waits that long after each firing to run, resetting and delaying execution if fired before the duration is up. Its more common sibling is throttling, which will run at most once per time duration while firing and will not reset.

How is this useful?

Honestly? Probably only as an academic pursuit.

But try this: open it up and write something, copy the URL and paste it into another tab or browser. Your text persisted without a database, any external script, or proprietary Cloud gizmo. No legal order can cease it to exist, and you didn't even need an internet connection. I think that's pretty neat!