I made this thing and set it live last week… 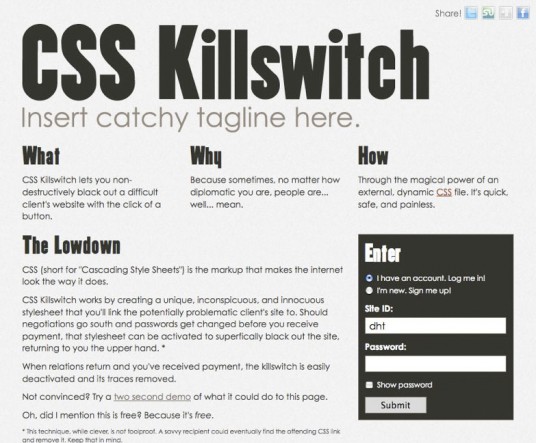 From the home page:

CSS (short for “Cascading Style Sheets”) is the markup that makes the internet look the way it does.

CSS Killswitch works by creating a unique, inconspicuous, and innocuous stylesheet that you’ll link the potentially problematic client’s site to. Should negotiations go south and passwords get changed before you receive payment, that stylesheet can be activated to superficially black out the site, returning to you the upper hand.

When relations return and you’ve received payment, the killswitch is easily deactivated and its traces removed.

My attempt at a web killswitch was predated by a couple others, so the idea is not new. Furthermore, my CSS version is far from ideal. In fact, of all the ways to do something like this, mine is probably the easiest to diagnose and override… but it is the easiest to implement.

In less than three days, before I even publicly unveiled it to anyone outside my Twitter pool, my little experiment got about 10,000 unique visitors, was tweeted about more than 100 times, and inspired one act of blatant plagiarism: 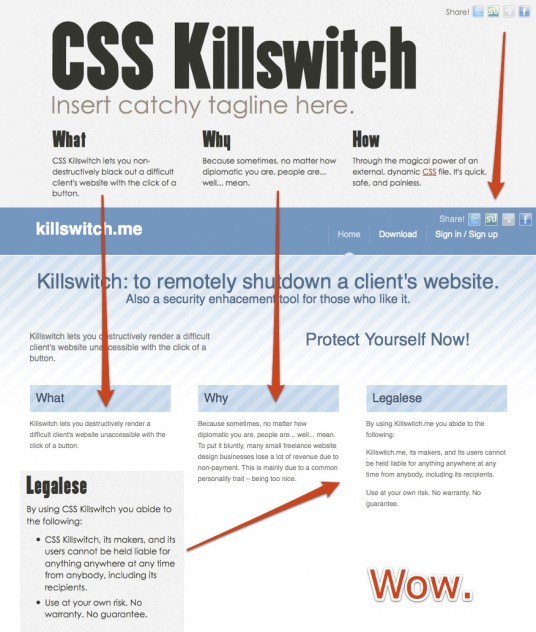 Reactions were mixed. Most tweets were positive. A couple were incredulous. A few were negative. The reddit discussion was lively and, surprisingly, mostly civil.

Lastly, I have never used this on any of my clients’ websites and I never intend to. Almost all of the people I’ve made sites for were very rad, savvy, intelligent people. In no way will this ever be 1% as good as a contract, and it undoubtedly has some serious ethical and legal implications. Mostly, like just about everything else I do, this was an experiment to see if I could do it.

And I guess I could? Not sure…