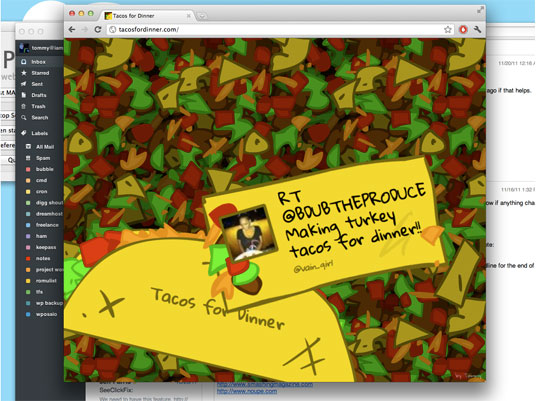 Here’s a stupid thing I made. It’s like a screensaver, I guess, but in a browser… and with tweets about tacos flying out of a swinging taco, oh, and also the tweets are on tortilla chips and the background is parallaxed taco ingredients.

Originally needlessly written in Node but rewritten to just be normal JavaScript.

Works best in Webkit browsers. Does okay in Firefox* if you’ve got a lot of memory. Obviously doesn’t work in browsers without good CSS3 support, but should degrade anticlimactically.

* Oddly enough, I wrote the CSS with Firefox and had animations running on pseudo-elements, but it turns out that isn’t supported in Webkit. By the time I figured that out and started worrying about semantics, I decided it was time to throw in the towel. Anyway, the taco image has some super minor parallaxing in Firefox.